ITW GSE enjoy a global market-leading position as a manufacturer of ground power units and pre-conditioned air units for the supply of aircraft. Also, we supply cables and hoses.
ITW GSE is a division of ITW - Illinois Tool Works.

ITW refers to our parent company and GSE stands for what we are doing: namely supplying the aviation industry with the cleanest, most reliable and most cost efficient Ground Support Equipment systems.

As part of a brand consolidation process, the legacy brands of AXA Power, Hobart, Houchin, J&B Aviation and ITW GSE Military were merged back in 2018. Since then, the entire product portfolio is sold under the ITW GSE brand name only. The ITW GSE team consists of dedicated people whereof many have been with the company for many years thus ensuring a great know-how and expertice. 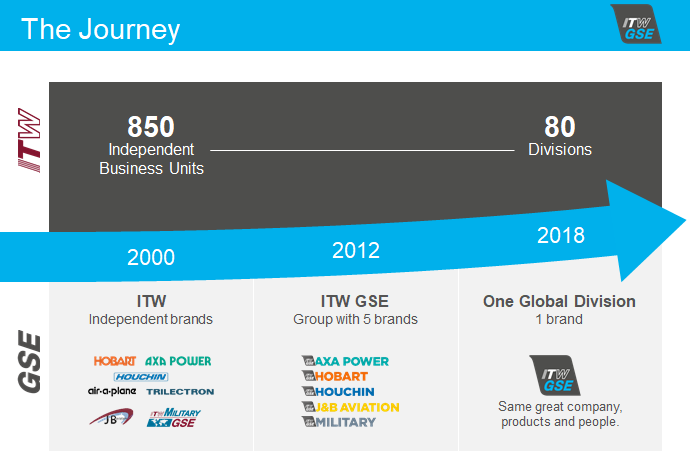 Founded in 1912, ITW (NYSE: ITW) is a global industrial company centered on a differentiated and proprietary business model. The company’s seven industry-leading segments leverage the ITW Business Model to generate solid growth with best-in-class margins and returns in markets where highly innovative, customer-focused solutions are required. ITW’s approximately 45,000 dedicated colleagues around the world thrive in our decentralized, entrepreneurial culture and work to position ITW as one of the world’s best-performing, highest-quality and most-respected industrial companies. In 2019, the company had revenues of $14.1 billion, with roughly half coming from outside North America

History of the AXA Power Brand

History of the Hobart Brand

History of the Houchin Brand

History of the J&B Aviation Brand

The milestones of ITW GSE and our legacy brands

2018
ITW GSE becomes one single brand of all ground power units, pre-conditioned air units and accessories. All legacy brands are absorbed under this brand.

1986
The first Point of Use PCAir unit “DXU” was manufactured by Air-A-Plane.  This was the basis of design for all current PCAir units in the market place today.

1946
Hobart Brothers sets up Hobart Ground Power after American Airlines asks the company to design a generator to start larger aircraft engines Air-A-Plane was the first company to manufacture a PCAir unit for cooling aircraft (mobile and engine driven).