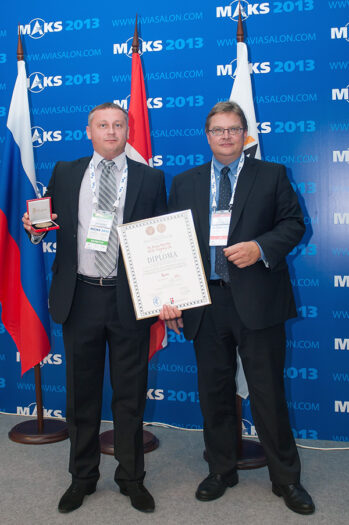 The Export Award, the Danish Export Association’s Diploma and His Royal Highness Prince Henrik’s Medal of Honour, was handed over to Managing Director Sergey Manskov by His Excellency Ambassador Thomas Winkler on 29. August. The ceremony was held during the MAKS Exhibition in Moscow.
Also present at the celebration were The Danish Consul General Mr. Klaus Sorensen, representatives of the Ministry of Foreign Affairs, AEGE customers, as well as representatives of AEGE Ltd, ITW GSE UK (Great Britain) and ITW GSE ApS(Denmark)-

The Danish Export Association’s Diploma and His Royal Highness Prince Henrik’s Medal of Honour, was established in 1982 by the Danish National Business Association in cooperation with the Danish Royal Court and the Ministry of Foreign Affairs of Denmark.
The Diploma and the medal are awarded in recognition of outstanding achievements in promotion and sale of Danish products and services in foreign countries and of solid investments of Danish business in Russia. The prize is awarded both to individual persons and companies, permanently registered abroad, including subsidiary companies of Danish enterprises. The award decision is taken by the judicial board under the chairmanship of His Royal Highness Prince Henrik, four representatives, appointed by the Executive Committee of the Danish Export Association and the representative of the Ministry of Foreign Affairs.