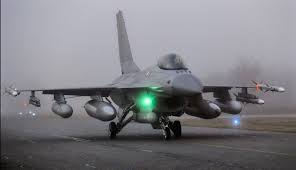 A while ago, we were contacted by Fighter Wing Skrydstrup, a Military Base in the Western part of Denmark, who had an AXA 2300 that was out of service.
Instead of going to Skrydstrup to repair the unit, we turned the situation upside down. We agreed that a couple of technicians would come for product training at our premises in Odense and repair their own unit at the same time! And so they did. On top of the AXA 2300 product training, the Fighter Wing technicians  had a supplementary AXA 2400 training course.

The technicians  repair and maintain various kinds of equipment  used for the F-16 fighter aircraft, and as part of the job, they go to the areas where the Danish F-16 fleet is in operation.