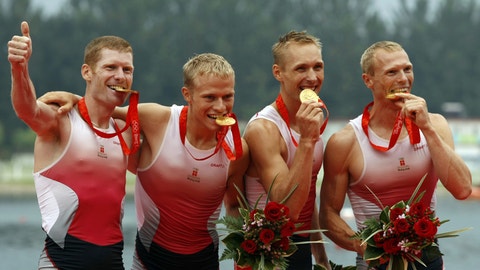 How to set goals and to move a team’s mindset in a positive way is crucial for most companies including ITW.  ITW would not be such a strong and growing global organization  without setting ambitious goals and achieving those by use of  the ITW tool box: A set of best practice business processes developed over the years.

Last week, the ITW GSE Odense team had a very inspiring speach by Eskild Ebbesen, Olympic and World Champion as oarsmen of “The Golden Four” (“Guldfireren”). The Danish lightweight men’s four that has not only established the boat type as a national icon but the crews in the boat have also set new parameters for the way elite athletes in all Danish sports go about their training today.

Eskild told his version of what it takes to be the best when it matters! In fact, there is not much difference between the way atlethes set their goal and  achieve them  and the way companies do. It’s all about the mindset – about setting a goal – and doing what it takes to achieve it. Once you have fulfilled your goal, don’t rest on the laurels. If you want to improve even furhter, you should  consider what you can do better. Even though this may only be just small steps or adjustments. And we can for sure tell that Eskild’s theory works! Along with his team, he won Olympic Gold in 1996, 2004, 2008 and Olympic Bronze in 2000 and 2012. Besides, the team also won numerous World Championships.

We can all learn something from listening to those great personalities that have shown the way – and WHO DID IT.

Thanks to Eskild for sharing the story behind the tremendous successes with us in such a passionate way.